Moments after play is resumed, however, the pitch is invaded, and the game is paused... On this occasion, the pitch-invader gets particularly lucky and is allowed off scot-free. 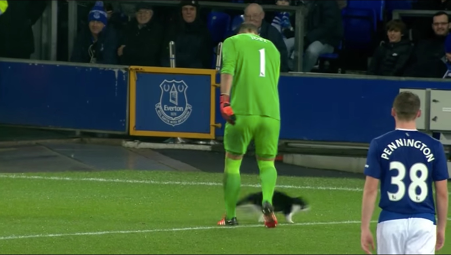 It’s the 66th minute of the match and Leander Dendoncker has just scored to put Wolves ahead by three goals to one against Everton at Goodison Park. Celebrations occur as usual and the Everton players trudge towards the centre circle to restart the match.

Moments after play is resumed, however, the pitch is invaded, and the game is paused. Following protocol, the pitch invader is removed from the grounds by players and staff. On this occasion, the pitch-invader gets particularly lucky and is allowed off scot-free; no lifetime ban, no repercussions.

The ‘Everton cat’, as the pitch-invader became known, showed how animals pay little attention to the ways humans order space. In the stadium, an environment of neatly ordered and seemingly controlled lifeforms—notably the perfect green grass on which football is played—animal appearances are unexpected; they remind us that we share space with other creatures at all times.

Through the crowd’s reaction, we see how atmospheres are fleeting and always able to be ruptured by the actions of nonhumans. For us, they also make us wonder what sorts of more-than-human shenanigans go on at night in stadiums, in cities, when humans aren’t around.

As shown in the video below where the goalkeeper ushers the cat off the pitch, more-than-human pitch invasions often induce demonstrable moments of response-ability to animals in cities. These rupturing events—which most stadium-attending football fans will see at some point in their lives—animate the urban, asking us what the city looks like from a cat’s perspective and how we might better share space with our always-present multispecies co-urbanites.

You can see the full video on the FA Cup YouTube channel.

Adam Searle and Jonathon Turnbull are both cultural geographers who study the relationships between humans and other animals, in addition to following football.